On March 26, Conrad Buchanan died of coronavirus at Gulf Coast Medical Center in Fort Myers, FL. Conrad was healthy and had no underlying health issues, according to Fort Myers News-Press. Nicole Buchanan, the patient's wife, said that her husband was so scared even though he was healthy and doing fine.

(Photo : Instagram/djgriffgotti)
Nicole Buchanan, Conrad's wife, was not able to say her last "I love you" to the DJ.

Conrad and Nicole Tested Positive to the Coronavirus

More commonly known as DJ Griff Gotti, the 39-year-old father started feeling ill on March 14; however, he was denied being tested, said his wife.

In a video interview, Nicole told CNN that she fought hard because the medics did not want to let her husband get tested since there were no underlying health issues.

Conrad got tested four days after, and results only came out by March 21, a week after he started feeling body aches and got low fever. Nicole said that Conrad's condition had gotten worse during that time.

Nicole also tested positive for the virus; however, she had no severe symptoms, but she has already lost her taste and smell senses. Their daughter's results have not come out yet.

Conrad's Message to the People

According to the News-Press, the results got the couple worried because a week leading up to the day Conrad fell ill, he was working at many different bars and nightclubs around Fort Myers.

Nicole explained that Conrad was in contact with so many people, and it would be hard to reach all of them, especially since for a DJ, socialization is endless. 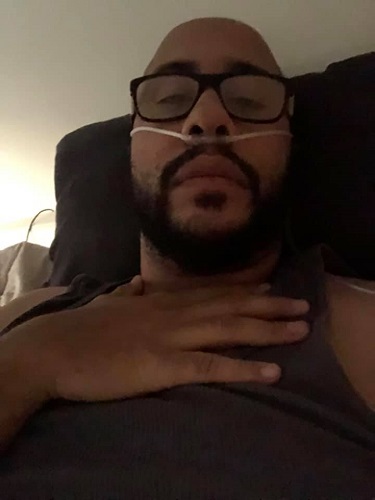 The 39-year-old DJ shared on his Facebook wall that he has contracted the virus and advised everyone to take it seriously, particularly addressing those who came into contact with him in the past few days.

He posted a photo of him with an oxygen tube attached to his nose, telling the people to be vigilant with their health because anyone can get infected. He said that he had a hard week, so he suggests that people should keep their distance and stay at home if there is no need to go out. He also said that he is doing everything that he can to regain his health.

A day after his post, Conrad's health worsened, making Nicole bring him to the hospital.

Nicole told CNN that that was the last time she saw her husband. She was not allowed to see Conrad even if he was begging them, saying that he needs his wife because she decides on everything.

At first, the couple thought that they could be together. However, when they reached the doors, the hospital was on lockdown. Nicole added that she did not even get to tell Conrad how much she loves him.

Conrad and His Daughter, Skye

After Conrad died, a GoFundMe was set up on behalf of his family. It has raised over $80,000 so far. According to News-Press, Conrad was the fourth and youngest victim to die of the coronavirus in Lee County.

The page read that Conrad was a dedicated, loving husband, father, and friend. He worked to give support to his family. He also shared a special bond with his daughter Skye.

Skye told CNN that they always watch "The Flash" and dance together. She said that it was funny because her dad could do performances in front of many people as a DJ even though he was not the best dancer.

Nicole also shared how the daddy-daughter shared similarities, like the way her daughter looks, it is evident that his blood runs through her veins.

Nicole shared that he plans to have an amazing and unique funeral for Conrad when it is safe to do so, even though she knows that Conrad is against it.