The couple's representative said that the couple welcomes their baby girl, and they are asking everyone to respect their privacy at this special time in their life. This good news comes one month after a rep of Grint and Groome announced that they were going to be new parents. 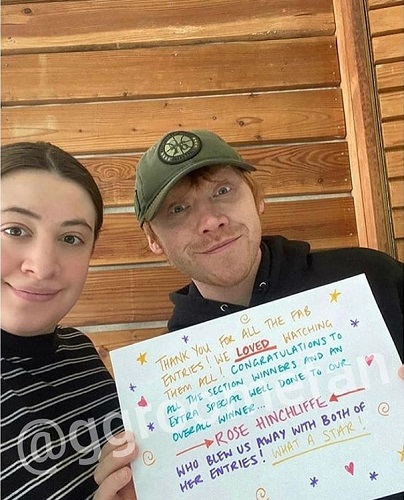 In April, a rep said that the couple is excited to announce they are expecting and is asking the people for some privacy. On April 9, Grint and Groome were seen shopping for supplies during the lockdown. Both wore casual clothes with Grint wearing a dark jacket and a green cap, and the 28-year-old "Angus, Thongs and Perfect Snogging" actress wore black leggings and a black T-shirt.

The couple was dating since 2011 and has kept their relationship profile low, which is why many of their fans are not aware of their status until a few years later when a throwback photo of them was seen in social media. A fan said alongside her tweet with a 2018 old photograph that she was shocked to know when she found out that Georgia from "Angus, Thongs and Perfect Snogging" has been going out with Ron Weasley since 2011. Last summer, there were rumors that Grint and Groome were married when they were photograph wearing matching gold rings. The actor's spokesperson told The Sun that there was no ringing of bells that happened.

View this post on Instagram
This will forever be my favorite photos of them together. Like look at how cute they are!I love them. Choose your favorite photo? #georgiagroome #rupertgrint A post shared by  Georgia Isobel Groome (@ggroomefan) on May 1, 2020 at 11:36am PDT

The "Harry Potter" alum surprised a local midwife with a video chat amid the coronavirus pandemic. In April, he appeared together with Miriam Margoyles, who played Professor Sprout in the "Harry Potter" film franchise, at a Home Special edition of the "One World Together in the UK. He showed his appreciation for a 33-year-old midwife named Sam Halliwell, who is working as a frontline during the health crisis at Birmingham Women's Hospital in England.

According to Metro, the actor told Halliwell that he was very inspired when he heard her story because it is "very Gryffindor behavior," then he thanked her.

Rupert Grint on Becoming a Dad

The cast of Apple TV+ Series "Servant," Rupert Grint shared with The Guardian in 2018 about his feelings about being a dad. He said that he felt strange upon turning 30 years old because he felt like he is not ready, and he does not know what the future holds for him. He just said that he would go with the flow and keep playing interesting characters to see what happens next.

Adding to that, he said that he would like to settle down and have kids of his own soon. The 31-year-old actor even joked about naming his future son after his screen name in "Harry Potter" saying that the name "Ron" is quite a good name. However, the probability of him naming his son as such is low because it is tough to pair a one-syllable first name to his surname Grint.