Ayanna Tatum was excited to see her son, Derrick Williams, climb the stage on his graduation from Baylor University. After experiencing so much from the family's movement from New Orleans to Houston during the wake of Hurricane Katrina, she wants to make her son happy. Williams' graduation did not proceed due to the pandemic, so his mom made him a personalized backyard ceremony.

On May 23, Tatum got creative and set up a stage in their backyard to proceed with Williams' graduation. She even had a Baylor University banner and podium with a microphone to look like a real one. She also invited a small group of family and friends to celebrate with her son on his big day. 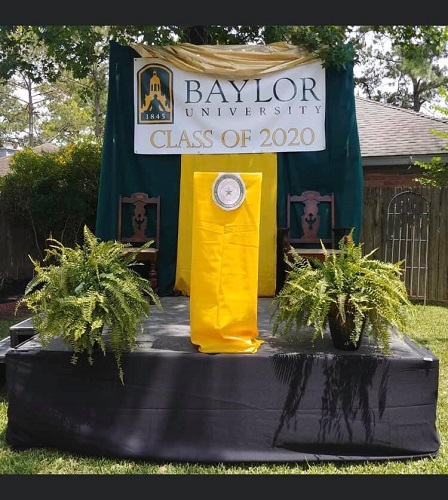 Tatum told People that Williams is a sweet and hardworking kid. She wants to do whatever she can as long as within her budget because he deserves so much. Williams said that he felt so blessed to experience precisely how he wanted his graduation to be, and that is to celebrate with his family and friends.

He also said that the substitute backyard ceremony was more than enough compared to the original graduation ceremony.

Tatum's priorities are her children.

The 41-year-old mom wanted to give her son and daughter a better life and education. She moved her family to Houston after the 2005 hurricane as she continued to finish her online college degree.

She said that her son overcame a lot of challenges because their family struggled financially. Other than that, he had to endure the hardship after Tatum's mother, who lived with them and was a "major influence" to her children, died in 2019.

Initially, the family planned to leave every detail about their hardships and celebrate Williams's psychology degree from Baylor with a dinner celebration. They even rented an Airbnb in Waco, Texas, so that their family and friends who were from out-of-state to stay at, but the crisis changed everything.

The cancelation of everything made Williams upset. Thankfully, Tatum's 19-year-old daughter sent her an impromptu backyard graduation ceremony of someone else, which she thought was a brilliant idea, so she decided to make one herself.

At first, Tatum thought it was impossible, but when she realized that it was, she made it happen with the help of friends and family. She even arranged Williams with the "Pomp and Circumstance March" with two of his former middle school administrator and family friends, Anita Harris and Frank Fraley walk into the backyard.

After the ceremony, Tatum had a gourmet dinner prepared for everyone. Despite reports of potential rainstorms earlier that week, the day turned out perfectly, said Tatum. She said that the most memorable part was seeing her son's reaction upon learning of the backyard ceremony.

What pushed Tatum to proceed with the surprise backyard ceremony was Williams's saying that he might not be able to attend the rescheduled Baylor graduation. He is attending McGovern Medical School at UTHealth in the fall to become an orthopedic surgeon.

Williams is so thankful for his mom for molding him into who he is today, being his biggest cheerleader, and serving as his rock.