On Wednesday, at around 3:38 in the afternoon, a Ryder box truck crashed with the back of a stopped school bus near Alma in Bacon County, Georgia. The truck driver, Johnathon Grayer, died after saving ten children from getting out of the school bus, a Georgia State Patrol spokesperson told People.

The truck driver jumped out immediately.

Cpl. Shane Copeland told CNN that the 25-year-old driver immediately jumped out of the truck and rushed to the bus to help the kids get out. The bus surveillance camera revealed that Grayer collapsed after he lifted the seats off students who were trapped underneath. 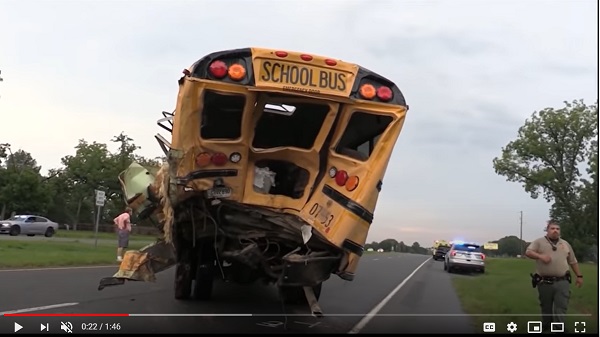 (Photo : YouTube/WSAV3)
A driver selflessly saved ten children after the truck he was driving crashed with the rear-end of the school bus.

Copeland said that the driver must have been running on adrenaline. He noted that his body could not hold it anymore. He also said that at that point, the driver was pretty much done, so he collapsed. The Georgia State Patrol said they moved Grayer to Bacon County Hospital, but he later died.

See also: Mom Got Shot and Killed While Daughter Was Having Online Zoom Class

Troopers did a great job.

Copeland said that the crash had left metal scattered across the highway after it sent the box truck into the air. Thankfully, the trained troopers know how to treat every accident as if their loved ones were involved, so they were very thorough.

A Bacon County fire and EMS compliance officer, Tyler Beach, told WSAV, that they had other tragedies and accidents like that before, but this one had shaken them the most out of the previous incidents.

Copeland told the outlet that they try to do standard procedures on every crash and try to treat all crashes equally. However, he added that he could not help but get emotional because he also has three children at home. He said that incidents like that become more personal because he could relate to the children's parents.

On Wednesday, Brian Kemp, Georgia Governor, tweeted about the fatal accident. He wrote that they are praying for the family and loved ones of the truck driver who lost his life. He is also praying for the children that got injured in the accident.

The GSP Specialized Collision Reconstruction Team (SCRT) is doing a follow-up investigation about the devastating incident. Copeland said that since children are back to school now, drivers should pay more attention to the road to keep the kids from encountering horrifying accidents.