A New York guy thought his dad jokes could bring a smile to his community, so he brought them out of their house and made signages for people to see.

Even if dad jokes are not as funny as they come out for some children, these can sometimes brighten up another person's day. 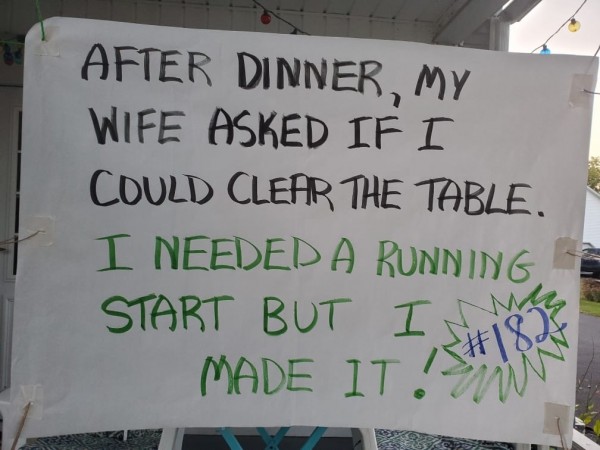 Woody Latour has been doing this for 200 days. He thought of this when the coronavirus pandemic struck the world. He wanted to share some positivity through his jokes.

Every morning, the New York guy cuts the paper and takes out his markers to write the signages for his jokes. He writes his jokes by hands for people to appreciate and have a good laugh.

Outside his home at Haverling Street, Latour posts his jokes.

READ ALSO: Dad jokes about daughter in TikTok performances [What every dad wants to say]

Aside from the people who pass by his home, there are people from other states and even other countries who laugh and wait for Latour's jokes.

After posting outside his home, the New York guy would take a picture of the signage that he made and post it online.

According to reports, his jokes have reached places like Alabama and countries like South Africa and Australia. Latour said, "ever since this story first got picked up we heard from friends in San Diego, Maine, Canadian Provinces like Alberta and Ontario that they saw my story."

Also, Latour's jokes are heard through a local radio station in their area. He sends one joke a day which is aired every morning at the WVIN Bath.

READ ALSO: 17 Funniest Dad Jokes of All Time On Twitter [Shared by the Children and Dads]

What were the jokes?

Here are some of the jokes posted by Latour on his page:

Since Latour started this project, he has already made 200 signages of his jokes.