An Oregon dad revolutionized a local playground for his daughter with a disability. After 11 years, other states have followed through with his great idea. One is currently waiting for funding before they could redesign it to allow more kids to play.

For the first time in 2009, G Cody QJ Goldberg got inspired to make a playground disability-free. He thought of redesigning the modern playground so his four-year-old daughter, Harper, could also enjoy playing in it.

He wanted Harper to play freely and without restrictions. However, when Goldberg brought his daughter to the local playground, he found that his child's tool could not easily access the place. He saw that the play equipment's wood chips did not allow his child's wheelchair through.

The city's parks and recreation department heard the dad's frustrations. But since they did not have funds for new projects, they could not help Goldberg. If there is private funding, they could help make the dad's dreams come true. 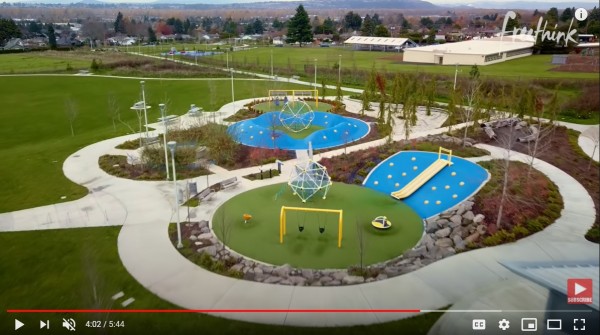 So the Goldbergs launched "Harper's Playground," a nonprofit organization to make US playgrounds more handicap-accessible. Three years after fundraising, they were able to open the first park for public use in November 2010.

The new playground had play equipment, green social spaces, and paved ramps for children with disabilities. Disabled children could finally play with skateboards or use their wheelchairs to enjoy their time. The place also has musical instruments that they could use.

See also: 10-Year-Old to Sleep in a Tent for a Year, Raising Money for Deceased Friend

According to "Freethink," Goldberg designed Harper's Playground with three levels of enrichment for children. He explained that the organization's rationale in redesigning the playground is called "levels of inviting." The doting dad said that children could use wheels to get everywhere because they made the space physically inviting.

He also noted that it should be socially inviting. So, they made circular seating areas, use of nature, and communal gathering spaces. He explained that they made the third level for an emotional invitation. They used music, arts, good design lines, and things that put one into a better emotional state.

Goldberg made the playgrounds to be wheelchair accessible, and they designed the place to have extra-wide slides so that caregivers could go with the child together. He shared that they met a person who did not realize that the site was an inclusive playground.

The person said that it was a "park for everyone." Harper's Playground had encouraged people to a better understanding and camaraderie with one another.

There are now nine all-inclusive playgrounds in the country, which included Harper's Playground. Another one is also found in Tokyo, Japan. Yet another one playground is waiting for funds for redesigning to cater to more children with disabilities.