A dad drew 'crap' pet portraits and surprisingly, he was able to raise money for charity.

The 'crap' pet portraits started as a joke that 38-year-old Phil Heckels made on social media. The dad drew 'crap' pet portraits because he was showing his six-year-old son how to make a thank you card. He drew their family dog Narla as a way to inspire his son. When he uploaded this online, he captioned it with an offer to sell the drawing for £299 or around 390 US Dollars.

When the dad drew the 'crap' pet portraits and posted it on social media, he never expected that he will gain support or even a following.

Heckels who is from Worthing, South England shared with CNN that everything came as a surprise. 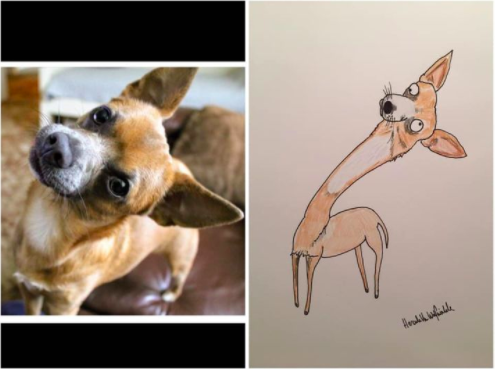 Receiving offers to buy his first drawing already came as a shock to Heckels. However, he received seven requests at the end of that day.

After the dad drew 'crap' pet portraits, he put up a Facebook page so that there is a platform that can host all the requests that he has been receiving.

In the description of the page, Heckels is offering hi services using the pseudonym Hercule Van Wolfwinkle.

He also wrote on the page, "Extremely realistic pictures which will grace any household."

Heckels says that he is trying quite hard to draw all the portraits.

Setting up for a charity

When he started to receive requests for his drawings, he could not take getting the money from those who wanted his drawings. That is why he thought of setting up a campaign to give the money to charity. Heckels created a fundraiser for Turning Tides which is a homelessness charity.

This charity is one of those that their family has been supporting over the years. He said that he chose this charity because he believes that every person needs a home. He said, "It's an absolute basic human need to have a roof over your head."

As of writing, his campaign has already gathered more than £12,000. The dad drew 'crap' pet portraits, and these drawings have already reached more than 200.

According to a report by CNN, Heckels already has a backlog of 1000 requests.

READ ALSO: Texas Dad Dances Outside Hospital to Cheer up Teen Son Who Is Having Chemo

The dad will keep drawing

When the dad drew 'crap' pet portraits he never thought he will receive such support, but because people seemed to like his drawings, he said that he will keep on drawing until people are donating.

He said in an interview with CNN, "I would die a happy man if I could spend the rest of my life doing this."