A four-year-old girl with an aggressive stage 4 kidney cancer bravely battles her disease no matter how difficult her condition is.

In September, doctors diagnosed Imi Schneider with stage 4 cancer. According to a GoFundMe page, the doctors found a Wilms tumor the size of a grapefruit on the toddler's kidney. The American Cancer Society stated that Schneider's Wilms tumors, known as nephroblastoma, affect children only starting in the kidney.

Schneider's relative, Parisa Faramarzi, who started the fundraiser, shared the child's condition on the page. She wrote that the four-year-old's lungs have spots based on a CT scan. It meant that her cancer has already progressed to stage four.

Faramarzi wrote that their world had stopped after hearing the sad news. She explained that by helping the child's parents, Soraya Faramarzi and Bret Schneider, the family could help focus on providing love and support to the little child.

She also noted that any prayers, positive vibes, and good thoughts could help them fight alongside the toddler.

In late August, the family noticed that there was blood in Schneider's urine. Doctors thought that the girl could have a urinary tract infection after the parents brought her to the hospital. Faramarzi explained that they had Schneider undergo an ultrasound after doctors referred them to a nephrologist.

See also: California Mom Gets Diagnosed With Stage 4 Lung Cancer Despite Active Lifestyle and Not Smoking

According to the fundraiser, doctors diagnosed the little girl with a kidney tumor on September 18. Immediately, they admitted her to a St. Louis, Missouri hospital where she had surgery to remove the tumor and her left kidney. 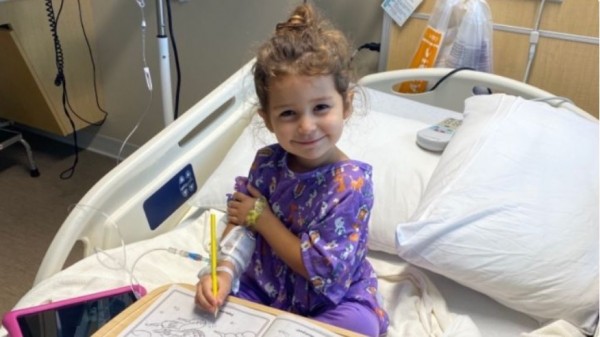 The complexity of her treatment

Schneider has been taking chemotherapy treatment while doctors monitor her lungs. She has to undergo three different types of treatment for 25 weeks, and then every six weeks, doctors will do a rescan.

Faramarzi noted that the toddler is a fighter noting that Schneider says she is proud of herself. The girl tackles each change strongly and positively. Apart from that, she also offers her love to her family and relatives.

On November 3, doctors noticed that while the spots had not grown bigger, they were unresponsive with the treatments Schneider had undergone. They decided to add a new radiation treatment plan, a new chemo drug, and seven more weeks of chemotherapy.

Doctors required Schneider's parents to be with her during the treatment. Faramarzi shared that they believe the four-year-old could beat her illness. She noted how roughly 80 to 88 percent of the children live a healthy life after the treatment.

Even so, they are both terrified and overwhelmed about what they will have to go through to save their family. As of writing, the fundraiser has already raised $36,000. The family is eternally grateful for any support that anyone could give.