Last Tuesday in Brazil, a child was trapped in a large vase because he was said to be playing the simple game of hide-and-seek.

Children are curious little human beings. Because of this, there are a lot of moments where they can get themselves into situations where adults can only ask and wonder, "how in the world?" The funny thing is, they put themselves into these mishaps by merely playing or doing simple things.

This particular case where children put themselves into puzzling situations happened again in Brazil when they were trapped in a large vase while playing hide-and-seek. The question "how in the world" can only be asked by the boy's family members as his mother rescues his son in his mishap.

A funny video shows that a six-year-old boy was trapped in a large clay vase, which was chiselled out bit-by-bit as shocked family members watch. In the video, the boy's head can be seen poking out of the top of the large clay vase at his grandma's home in Amazonas, north Brazil on Tuesday.

Laughing family members gather around to comfort the scared young boy who was stuck in a vase because he was believed to be playing hide-and-seek, as he tries his hardest to free himself from the narrow neck of the large clay vase of his grandma.

Because the boy can not be freed out from the vase by merely pulling him out, the mother rescues the son by breaking the open vase piece by piece with a hammer.

In the video, a woman believed to be the boy's grandmother tried to joke around her grandson's case by saying that he would pay a huge price for her vase. It was noted that the vase was gifted to her grandma two years ago by a close friend, a designed item that was said to have cost around 60 dollars.

ALSO READ: Young Boy Reunites with Family After Being Stuck Overseas Due to the Coronavirus Pandemic

Family members of the boy believed that the curious boy got trapped as he was busy playing hide-and-seek. 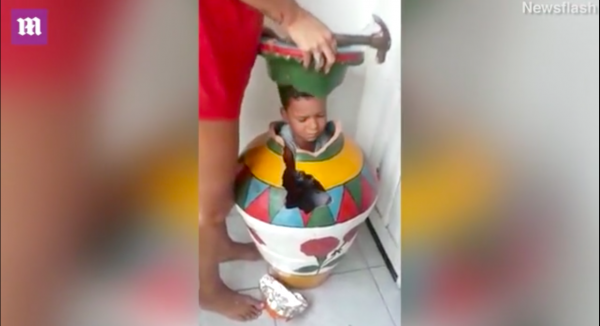 Thanks to the family's can-do spirit, the boy trapped inside a vase due to playing hide-and-seek was released without needing help from the emergency services. The family can also give thanks for how the mother rescues the son from his mishap in playing hide-and-seek. The boy surely needs to thank his mom for saving him from this funny yet somehow scary mishap that he put himself.

The family lives in Amazonas, the largest Brazilian state by area, larger than the land areas of Uruguay, Paraguay, and Chile combined.