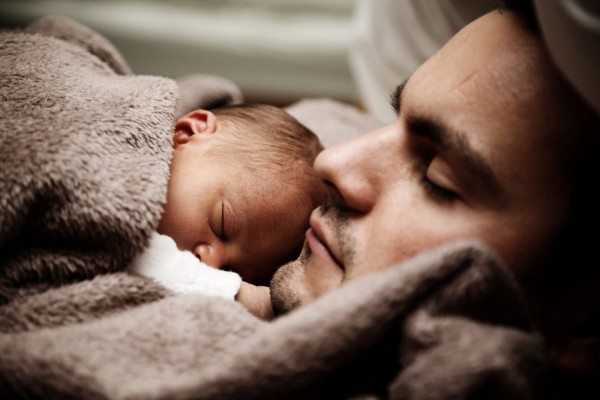 Fathers can experience postpartum depression too, and it is more common than you think. Paternal depression affects two percent upto 25 percent of fathers during their partner's pregnancy or in the first year postpartum.

New responsibilities and demands during pregnancy and the postpartum period can cause changes in the life of a father. It is important to understand what risk factors can affect the overall development of depression.

Some of the risk factors are a father's difficulty in developing an attachment with the baby, having a lack of good male role model, a lack of support from friends and family members, changes in marital relationship and lack of intimacy, lack of rewards in parenting, feeling excluded and jealous over the bonding between the mother and the child, maternal depression, low testosterone and financial and work stress.

Symptoms of Postpartum Depression on Dads

Men show different signs of depression, sometimes they do not cry but they feel angry and frustrated. The depression may manifest itself in terms of impulsivity, irritability, and feeling unable to find pleasure in almost anything. Fathers who suffer from depression are more likely engage in domestic violence, substance use and they may even discourage their partner from breast pumping or breastfeeding.

The AAP recommends that all mothers should be screened for depression during pregnancy, specifically at 1, 2, 4 and 6 months after giving birth by using screening tools like EPDS or Edinburgh Postnatal Depression Scale. Doctors have started to screen fathers too using the EPDS questionnaire. The early identification of depressed fathers can help in accessing support and treatment so that they can remain present and they can be involved with their family in a positive manner.

The research demonstrates that it is important for men to get treated for depression and it may include talk therapy, community-based supports, and antidepressant medications.

The mood of the father can influence the way that he interacts with his partner and children. Depressed fathers are more likely to spank their children than those who are not depressed. They are also less likely to interact in positive ways, like singing songs, playing games and reading to their children.

Children who have fathers with depression have a higher chance of developing emotional and behavioral problems at later ages. There is some research that suggests that a father's depression early in a child's life puts the child at risk for developmental delays.

Depression in dads also increases conflicts in marital relationships and it makes mothers vulnerable to depression. On the other hand, for children whose mothers are already suffering from depression, having a nurturing and involved father can protect them from some of the negative effects of their mother's depression.

Talk to a Health Care Professional

Doctors and health care providers are familiar with the different types of depression. They know ways to help you and your partner and they can explain your options as well. They are always ready to listen to you and they can put you on the road to recovery.

Any parent may feel depressed when having a baby and starting a family.Just because they suffer from depression, it does not mean that they are bad parents or they are not happy to start a family. In fact, getting proper treatment and support can help you care for your child and your partner. You and your family do not have to suffer because there is help available.

ALSO READ: What You Should Know About Postpartum Depression