An Indianapolis police officer immediately jumped into a pond after learning that two teens got trapped inside a sunken car.

Even though the police officer managed to get the teen girl out of the water within four minutes, the girl was pronounced dead at a local hospital. The outlet reported that the teen boy is still currently in critical condition.

Officials confirmed that the incident happened at around seven in the evening. Witnesses allegedly said that the teen was driving at a fast speed when it left the road. The car hit a tree and fell into a 12-foot deep pond. 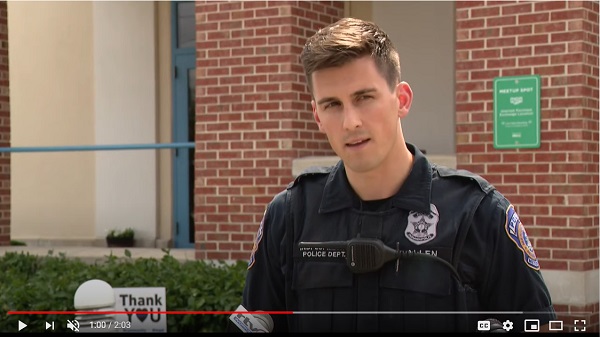 When the 25-year-old police officer received the call for help, he was less than half an hour away. He immediately jumped into the waters when he arrived at the spot. Thankfully, he was a former collegiate swimmer.

The three-year police veteran said he had a rough idea where the car might be. He got his equipment off and went into the water after the two teens. Allen tried to look for the vehicle in the water by using his eyesight first. When he did not have any success using his eyes, he then used his feet.

The police officer said that since he is 6'6", he used his height as an advantage. He was able to locate the car after putting his feet down. He started doing controlled dives until he found some openings. Then, he started reaching around to see if he could find the teens.

Allen found the girl trapped in the backseat and brought her to the shore. The first responders transported the girl to Community Hospital South after performing CPR, but she eventually died. Marion County Coroner's Office identified her as Ella Magyer.

Read also: Drowning: Leading Cause of Death in Young Children [Useful Tips to Prevent Them From Happening]

The police officer went back to the water to rescue the boy from the backseat. The rescuers brought the boy to St. Francis Hospital South, where he is still in critical condition.

Another teen pair got into an accident

The WTHR also reported that another pair of teenagers survived the incident. A 17-year-old teen driver with a 16-year-old passenger escaped the car and swam 35 feet to reach the shore. They are both in good condition. The outlet reported that rescuers also brought the two teens in hospitals as a precautionary measure.

The Indianapolis officials are currently investigating whether the teens were wearing seat belts.

Read also: Officer Bravely Jumped Off Cliff to Save Two-Year-Old Twins [Father Drove Them to Fall]

People are saddened by the teen's tragic death

Community members and parents have shown their sadness over the tragic death of the teen. They are also concerned about others driving along Frye Road because it does not have guardrails. They created a petition on Change.org to add safety measures along the road to prevent accidents from happening again. According to WTHR, the locals consider the road notoriously dangerous.

Parent Julie Hurt told the outlet that her heart dropped when she found out about the teenage accident. She said that it was one of the first lessons in teaching her son about the dangers on that road. She advises everyone to be careful when going around that bend.