Dad sweetly transforms garage to look like a real classroom so that his daughter could have the best school-at-home experience.

Parents and teachers have to be creative as the children start schooling again. Since kids have to be homeschooling due to the pandemic, the new normal environment could affect their productivity.

Teachers use many varied styles of schooling. There are Zoom classes and hybrid models. Some use plexiglass barriers to keep the students safe from the coronavirus. The year 2020 is a year to remember as many have to adapt to the changes that come with it. 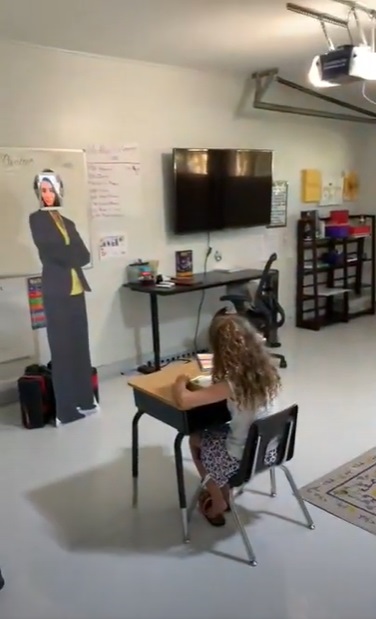 On the other hand, parents fret over how to get their children to do online schooling. They are bothered whether their kids need a desk or a quiet space for learning. They are also worried about not having separate rooms for each of their children.

A Reddit user shared a video to the subreddit r/nextfuckinglevel that you might find worth watching. Without identifying who the dad is, the video shows how he has built a real-life classroom.

While not everyone agrees that what the dad did was a good thing, it is obvious how he cares about his daughter. Some remarked that the dad was impressive, but others said that the place felt "dystopian," "creepy," and "apocalyptic."

Others said that they are in a global pandemic after viewing the clip. However, other people noted that the setup the dad did was better than some public schools.

Some people commented on why the setup was good. Reddit user zeke-apex said that the environment was supposed to emulate how a real school classroom the child used to go to. The user explained that there might be some people in their home that could be causing a distraction to the child's learning so the dad did this.

See also: Mom Got Shot and Killed While Daughter Was Having Online Zoom Class

Reddit user Gangreless agreed with the first user, saying that he could not believe seeing bad comments about the dad. The user also noted that the dad's parenting is a great way for his daughter to adjust to remote learning.

See also: Dad Shared How He Got Son to Wear Face Mask

That same Reddit user believes that children need an environment the same as office as it is just like a job that they have to do for seven to eight hours a day. Most of the comments are positive praising the dad of his efforts.

What the dad did was a reminder that the pandemic has made a gap between our means and needs. However, thanks to this dad because he went all the way to make his daughter's schooling at home a little better.