A Louisiana military dad meets his eight-month-old son for the first time after he was born. After his deployment, this was the first time that he is returning home to see his wife and their newborn.

Andrew and Skyla met during their high school days, and it was when they became sweethearts. Soon, the two got married and got pregnant with their son. When their son was about to be born, the Army National Guard sergeant, Andrew Broussard, got the news that he had to be away from his wife.

Could not be with wife in labor

He got deployed to the Middle East and could not return just in time for his son's birth. After taking three months of training, Andrew had to stay in Kuwait for nine months. When he got sent to the area, his wife was six months pregnant. They stayed in contact with one another using Facetime.

When the 25-year-old wife was undergoing labor, Skyla used Facetime to get in touch with her husband. She gave birth to their son, Micah, without Andrew by her side. 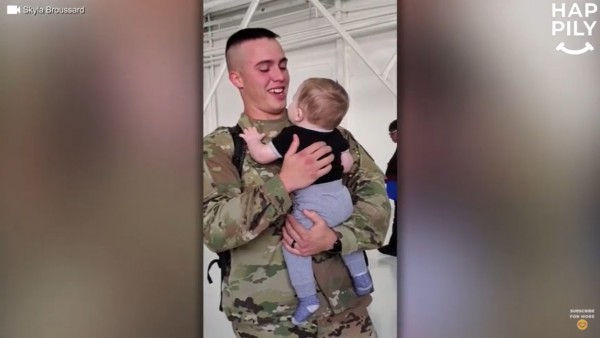 The 24-year-old sergeant watched his son grow up through pictures and videos sent by his wife. Although he was able to see him grow up virtually over the months following his birth, Broussard missed his son so dearly.

Finally, he could go home

Eight months after they welcomed their first child, the sergeant finally got the good news. In January 2020, he could finally go home to be with his wife and son.

Skyla and Micah were at Alexandria International Airport, Louisiana, waiting for Andrew. Upon entering a hangar, Andrew's face lights up upon spotting his wife and son. He tried his best to keep tears from falling as he gets closer to meet his son in person for the first time.

He embraced Skyla and then held Micah in his arms. In the video uploaded by "Happily," it was obvious how happy Andrew was as he hugged his son for the first time.

Although he also went to perform National Guard duty to help with the relief efforts when Hurricane Laura hit the area, he made sure to spend more time at home to be with his wife and to make up for the lost time with his son.

The Louisiana military dad told "Happily News" that seeing his son was one of the most powerful moments of his life. He explained that he instantly loved him with open arms because he knew exactly who his son was.

Make up for the time lost

What broke his heart was that he could not get the time that he missed back, seeing how big his son already was. He said that all he could do is to make the best of their time going forward and remember what it was like to sacrifice for it.

Skyla said that it was very emotional seeing how happy her husband was upon seeing Micah. She noted that she was very proud of Andrew for all that he does for his family.