A Florida dad reminds his kids about his work-from-home setup through a funny poster. He hangs the sign outside his home office to remind his kids of the answers to their frequently asked questions.

David Kuhl is from Naples, Florida, and has been working from home since the beginning of the coronavirus pandemic.

The photo which he posted on LinkedIn has been garnering attention from people on the Internet.

READ ALSO: Viral Video: Couple Finally Reunites After 215 Days [They Have Been Married for 60 Years]

Kuhl has five children. Since the beginning of the pandemic, he shared that he has been trying to balance his family and work life.

He shared in an interview with Good Morning America, "It has been comical at its best."

For 20 years, Kuhl has been working as a human resource leader. The Florida dad is recently a general manager at Salo, LLC. That made him quite active on LinkedIn, where he uploaded the funny poster.

The poster had a big "Do Not Enter" sign. Next to that reminder is the threat that entering the room would mean losing two days of screen time.

After this reminder are short answers to the frequently asked questions of his children. These answers were, 'No.' 'Unless you are bleeding it's fine.' 'Pieces of fruit.' 'In the wash.' and 'Ask Mom!' 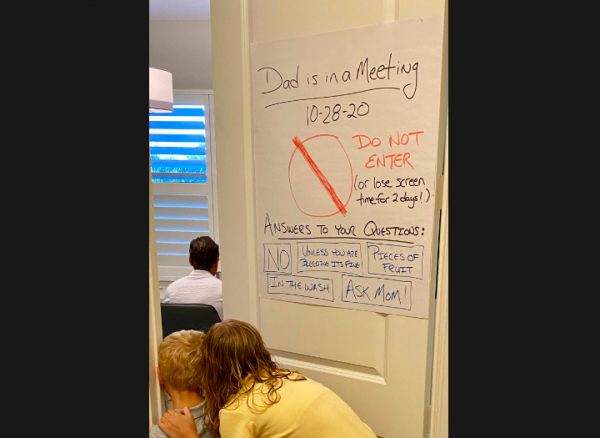 (Photo: Screenshot from LinkedIn)
Florida Dad Reminds Kids About His Work-from-Home Setup Through a Funny Poster

As of writing, the video already has more than 60,000 reactions and more than 2,000 comments. Kuhl shared that although some of his posts on LinkedIn have previously been viewed thousands of views, he did not expect that his most recent post will go viral. He said, "I posted it last Friday around lunchtime ... by the time I woke up, there were half a million views."

Kuhl said that he decided to share the photo after people in his company found the photo funny. He said, "People laughed and thought it was kind of creative and then I decided to post it on LinkedIn."

There was a mix of reactions from people who saw the photo.

Some netizens thought that the funny poster was hilarious. One netizen said, "What a great sense of humor you have! I am sure your kids thought it was funny! now here is the million-dollar question- did it work? Lol!"

However, other people thought that the part which says, "Ask Mom!" is inappropriate, "Huh, if a mom posted this all hell would break out - whether a joke or not. I want to think it's funny, but it's just not."

Some netizens thought of sharing their techniques so that working from home is bearable.

READ ALSO: Baby Prank: Texas Mom Hands Fake Baby to Husband Who Did Not Even Notice