A woman in a coma gives birth to twins prematurely after contracting COVID-19. She got worried and thought she had lost her babies upon waking up.

In late March, Perpetual Uke first fell sick when she got infected with COVID-19. Her became so severe that doctors had to bring her to Queen Elizabeth Hospital Birmingham. The Sky News reported that she was later required to be on a ventilator.

Gave birth through a cesarian section while in a coma

Soon, the medical team had to place her in an induced coma. While she was still unconscious, she gave birth to her twin babies through a cesarian section. The family welcomed a baby boy Pascal and a baby girl Palmer. 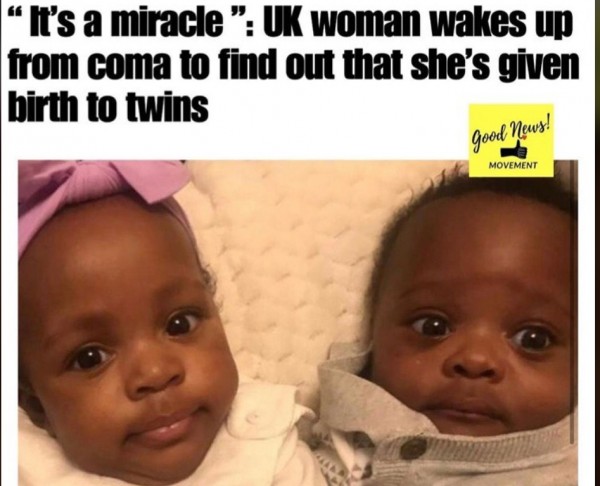 The woman from the UK told the outlet that she was only in her 24 to 25 weeks of her pregnancy when she gave birth to her twins. By the time she woke up, she was so disoriented.

Worried because her bump was missing

Uke explained she got distraught because she could not see her bump anymore, which made her think she had lost her babies.

On April 10, the twins entered the world at 26 weeks. Doctors had to place them in incubators because they each weighed less than two pounds at birth. The duo stayed in the hospital's neonatal intensive care unit because they only weighed 770g and 850g.

According to Sky News, before the rheumatology consultant was able to meet her newborns, she had to spend 16 more days in the intensive care unit. When she saw the little ones, she felt emotional because she could not touch them. She added that her twins did not look like her older kids due to their tiny size.

Hospital consultant Perpetual Uke was in a coronavirus-induced coma as her twins were delivered by caesarean section.

Matthew Uke, the husband, took care of their two older kids, Ronald and Claire, when Uke had to stay in the hospital. He explained that when their twin babies were born, he had mixed feelings because his wife was still fighting off the virus.

He remembered he could not talk to his wife after giving birth because she was still in an induced coma and was sick with COVID-19. While he was happy that the twins came out, he wondered whether his wife would be coming home with them.

Soon, the hospital finally released Uke and her twin babies. The UK mom said that the twins are doing "wonderfully" after reuniting with her family once again. She noted that seeing her twins sometimes makes her cry because she never knew they would make it.

Uke said that what medical professional science could offer amazes her. She could already imagine how her twin children would grow up to be in the future. She could see them growing up to be good playmates, chatting and laughing together.