Andi and Thomas Bonura decided to adopt five siblings who were from different foster care on May 6. The loving Texas couple helped the five children, who were living apart, to be reunited.

DePelchin Children's Center facilitated a Zoom call to get the five children adopted. The couple initially had three biological children, Joey, 11, Sadie, 10, and Daphne, 8. Now, they are also parents to twins Thomas and Carter, 8, David, 6, Gabrielle, 4, and Bryson, 2.

On Monday, Andi told Good Morning America that no one could argue that these children are brothers and sisters. She could not help but commend that the kids are amazing and resilient because even though they have been through a lot, they are the sweetest.

Andi explained that she and her husband wanted to adopt children for years due to problems with conception. After one miscarriage, she became pregnant with twins but gave birth at 25 weeks.

Eli, one of the twins, did not survive. The one who survived, Joey, has cerebral palsy and struggles with vision. He can only converse using sign language. Andi shared that whenever people start to pity their firstborn, she would ask them not to because Joey is the happiest kid in their house. 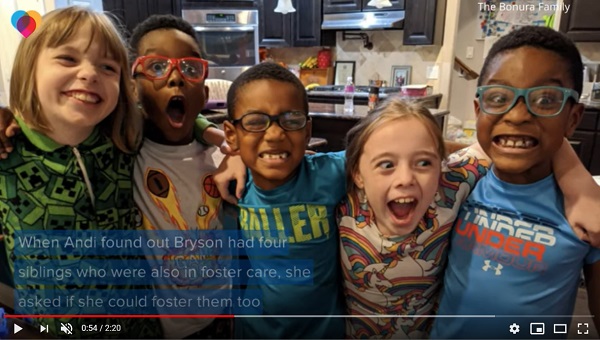 (Photo : YouTube/CBS News)
The children are amazing and resilient because of having gone through a lot at very young age.

No more addition of biological children

Later on, the mom of eight gave birth to Sadie and Daphne, who did not reach full term before birth. It finally convinced Andi not to have more children biologically.

In 2017, the couple got a license to adopt, so in November, they adopted Bryson straight from the hospital. Next, they took David and Gabrielle in their home. Living with other families, the older twin brothers, Thomas and Carter, would visit their siblings.

Chance to adopt the five siblings

Soon, the Bonura couple got the legal opportunity to adopt all the five children as their own. One day they got a call asking them if they would like to adopt the two older children as their foster parents are terminating rights. The couple, without hesitation, said yes.

After finalizing the adoption, the couple's neighbors organized a car parade to celebrate the new family of ten with family and friends. Andi said that the kids are the greatest, and they are fun to have around. She also said that everything was God's plan, and now, their family is complete. 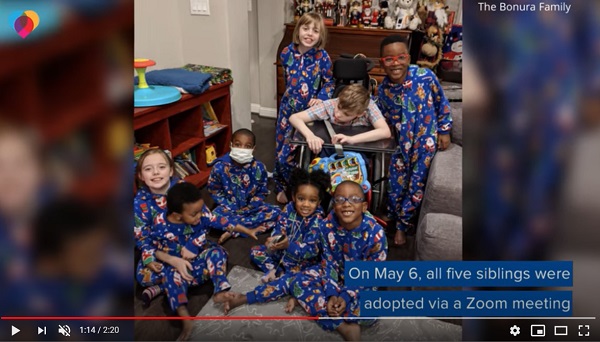 (Photo : YouTube/CBS News)
On May 6, the couple officially became parents of ten.

For a month, doctor cared for a baby whose parents are COVID-19 positive

Viral: Single dad adopts abandoned kids because he relates to them