A heroic Bronx dad shielded his three kids from a shooting that happened at a car dealership. After sustaining multiple injuries from the shot, he was fired from his two jobs and is now jobless.

TMZ reported that on Monday, Anthony Jefferson was at a car dealership in the Bronx with his children. Three suspects entered the store and fired multiple shots into the building at around 7:30 in the evening, hitting the dad.

Based on the surveillance video of the store, the father was sitting on the couch with his young children when suddenly, bullets started flying. The clip shows that the dad immediately threw himself on top of the kids while dragging them to the floor for safety. 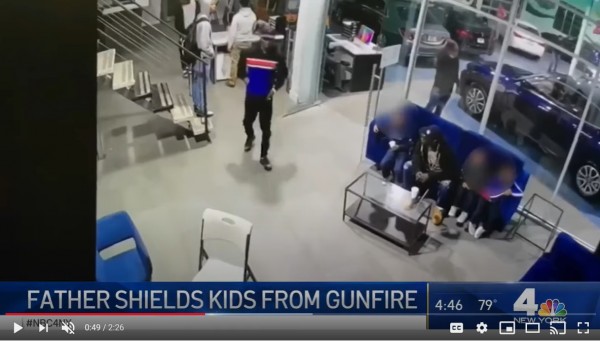 The kids were aged 6, 5, and 2. According to a GoFundMe page, the selfless dad shielded his children with his body. The gunmen fled on foot after the shooting and now it is still unknown the reason behind it.

Because of that, he received three shots, two in his boot, and one in his right thigh. His wife, Danica, told TMZ that because Jefferson could not walk after getting the gunshots, he got terminated from his two jobs.

The heroic dad used to work at a maintenance company as a head painter, and as a construction worker in New York City. Danica did not mention the name of the companies he has worked with during an interview with TMZ.

See also: Texas Couple Bravely Weathers Through Many Storms, Including COVID, in Nearly 50 Years of Marriage

Jefferson has been discharged from the hospital; however, he will still need to undergo surgery to remove the bullet still from his leg. According to the GoFundMe page, Jefferson would also need extra care.

Apart from that, it stated that the family is planning to send their three children to therapy. It noted that the kids "are beyond traumatized" from the threatening incident that they have experienced.

The kids are traumatized from the incident

Danica said that their kids are now afraid to go outside. She shared that the children are crying in their sleep as they ask why the man shot their dad.

On Thursday, Serena Wingate, Jefferson's friend, launched the fundraiser. In just one day, it has already raised more than $16,000 out of its goal of $24,100. Wingate wrote on the page that its goal is to help the heroic dad not only with his medical bills but also to help his kids get the therapy that they need.

She also wrote that Jefferson was planning to surprise his wife by shopping for a vehicle for her as a birthday gift.

See also: 14-Year-Old Teen Celebrates Birthday While in Hospital Due to COVID