A dad suffering from terminal cancer wants to leave a legacy to son. Robert Bailey, a dad of a two-year-old boy shared his story with The Dad.

In an interview, Bailey shared his journey of trying to put together a legacy that he would leave to his son, with just a very limited time.

Bailey said that he has a very rare form of bladder cancer. He was also told that it is inoperable.

Both chemotherapy and immunotherapy did not work with Bailey. Currently, the cancer has also spread to his lungs.

According to his doctors, he might only have 3-6 months to live, in case a new treatment will not work.

Roberts and his wife, Debbie, have tried to have a child the natural way. However, they were unsuccessful. That is why they decided to resort to adoption.

Luckily, they were blessed to have Parker, but just when the adoption process was nearing its end, they discovered that the dad was suffering from terminal cancer. Bailey said, "It's kinda hard. I waited 40 years for that guy." 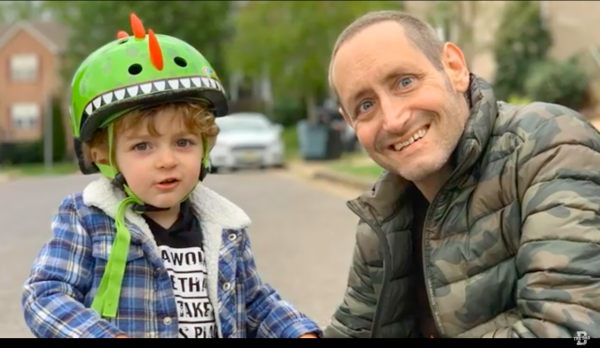 (Photo: Screenshot from YouTube account of The Dad)
Dad Suffering from Terminal Cancer Wants to Leave a Legacy to Son

Preparing for the worst

Because Bailey has long accepted the fact that he does not have much time, he thought of finding ways to leave a legacy to his son.

He has been asking friends, family members, and even strangers in social networking groups about how he could leave his son a legacy.

The dad suffering from terminal cancer, started by creating a will. He said, "It's emotional. It all started when I created a will, which I should have done a long time ago."

He has also started writing birthday cards for his son whom he knows he will leave behind. That is when he also realized that his growing son will be going through life fast. He said, "He's gonna grow up fast because you're going through 4, 5, 6, 7... And you realize, he doesn't have a lot of time growing up until he's 15, 20, 21?"

READ ALSO: Viral Video: Young Golfer Swings Perfectly to Hit a Hole in One [He Is Only 5 Years Old!]

Beginning to leave a legacy

As part of the legacy that the dad suffering from terminal cancer would want to leave to his son, he is working with local musicians to record a song for his two-year-old son.

Aside from this, he is also writing a book that narrates to his son his personal story.

Robert was chosen by The Dad as the Dad of The Month this September 2020. He received 500 US dollars from the group. Robert and his family are still accepting donations through Venmo at @RBailey77.