A foreign domestic helper runs and cycles to help raise funds to help the needy. She knows what it feels like having nothing to eat because she came from a low-income household.

Jannah Pascua started working for her relatives when she was 12. She grew up in the province of Ilocos Sur, in the Philippines, with little money and food. She worked so she could go to school and help her family with finances.

Gives back to the community

Since 2005, Pascua has been working in Singapore as a foreign domestic helper. She knows that many people are suffering like how she did in the past, so she is giving back to the community.

See also: 2 Dads Launch Own Bake-Off and Send Cookies to Frontliners for Judging

She joined marathons and cycling events to raise funds to help the needy. She participated in Aidha and the Humanitarian Organisation for Migration Economics (Home) since 2011. 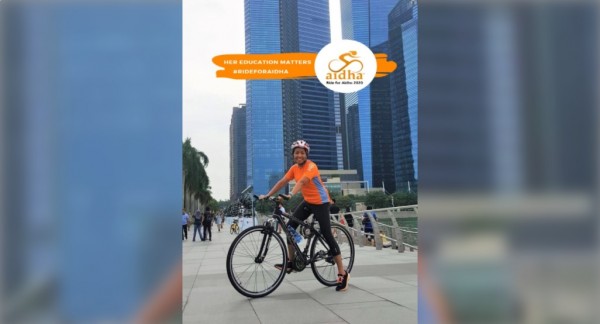 The 46-year-old has three kids with an age range of 18 to 21, whom she last saw two years ago. She explained she knows what it is like having no money and got nothing to eat because she came from a low-income household.

Because of that, she wanted to give back to the community. Pascua teaches maids voluntarily about how to manage their funds and start their business twice every month. While her husband does the daily operations back at home, she is the one that handles their finances.

Apart from completing four half-marathons, seven marathons, and four OCBC Cycle events, the mom-of-three is also a dragon boat team member. She explained that when she signed up for the Standard Chartered Singapore Marathon in 2011, her first, she was never an active person.

Pascua joined the race because she wants to raise funds for Aidha. She struggled to finish it because she had no proper training. However, she managed to finish a minute less than the cut-off time of eight hours.

"I came from a poor family and I know what it's like to have nothing to eat and no money," says Ms Jannah Pascua. Posted by The Straits Times on Saturday, November 14, 2020

The marathon left her body in pain, so she promised herself that it would be her last. But she decided to try it again in 2015. Since a 100-meter run was hard for her, she tried to run by increasing her distance every night, which has helped her complete the race in about six hours.

See also: Dad Makes 200 Outfits for Daughter, So She Won't Feel the Same Trauma He Did as a Child

She joined the OCBC Cycle in 2017 to try cycling. From the East Coast Park, Pascua rented a bike so she could join the 42km category. Since then, she has participated in each edition of the OCBC Cycle.

The foreign domestic helper tried to better her time every cycle. This year, on November 1, she finished her longest ride by cycling 121km. The distance was three times the 42km she cycled in the past three editions.

Pascua also took part in this year's Ride for Aidha 2020, joined by over 135 people. It aims to garner $30,000 to run its Gift of Education campaign. She explained she wanted to raise funds and to push her limits, so she joined the program.