The 9-year-old daughter of singer Pink, Willow, rarely gets out of the spotlight. That is why when she showed off her talent in singing in the Disney Family Singalong, fans were surprised and delighted by the young girl's talent singing.

In the Disney Family Singalong, Pink was joined by her 9-year-old daughter in singing "The Christmas Song."

The celebrity mom, Pink, sang the first few verses. After a few lines, she holds the mic to her daughter, Willow, who gracefully sang her part of the song.

The mom and daughter enjoyed their duet and continued swaying and singing to the rhythm of the song.

The website Scary Mommy described Pink as someone "brimming with love and pride." 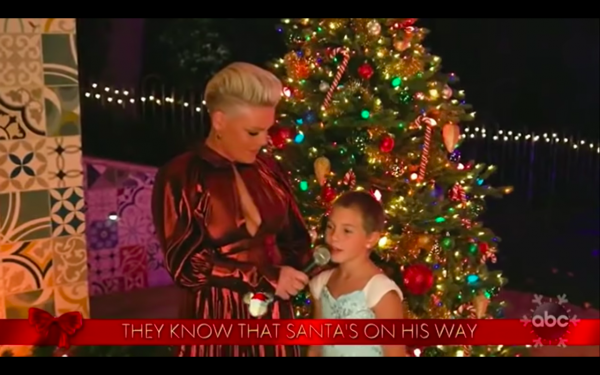 When she held out the microphone to her 9-year-old daughter, she was brimming proudly to her little girl. At some portions of the duet, Pink would even give her young daughter a little nudge at her shoulders, as if encouraging Willow.

ALSO READ: Kate Hudson Believes She Is a Strict Mom

On Twitter, some netizens shared how amazed they are at Willow's singing. They were not only amazed by the little girl's talent, but they also admired the adoration the mom and daughter have for each other.

One Twitter user even said that the celebrity mom should already get her daughter a recording contract. That netizen added, "Beautiful voice," with an angel emoticon next to her tweet.

There was another netizen who said that the mom and daughter duet made her a bit emotional, "Well now I'm sobbing in my work car park listening to @Pink and beautiful Willow singing The Christmas Song (crying emoji, heart emoji)."

Some netizens also noticed how Willow adores her mom, "The way Willow looks at her mama with such love and adoration! Her voice slayed!"

Aside from the adorable mom and daughter, there are netizens on YouTube who said that their version was one of the best, "Amazing I love pink voice and her daughter wow she can sing. Love that song! Has to be the best I have heard of this version on this song! You guys did a amazing job."

Aside from being a talented singer, the 9-year-old daughter of Pink is also a creative little girl. During the pandemic quarantine, Willow kept herself busy by making facemasks. She did these facemasks for herself and for her family too.

Pink's young daughter made the facemasks from an old shirt, something that made Pink a proud mom. She even shared Willow's creation on her Instagram page.

ALSO READ: Kristen Bell Teaches Her Children: Beauty Is Not a Standard